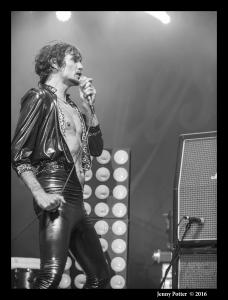 I knew that this festival would be brilliant and it was. I had a photo pass for the 2 days 23rd and 24th July 2016. The last time I photographed here was in 2013 when I had an AAA pass and the headliner was Saxon. That year I had been on the stage with Anvil photographing them.

This year the weather was fantastic on the Saturday bringing the crowds in by the thousands.


I Arrived at the festival an hour earlier parking in the artists and crew parking and collecting my VIP, Photo pass and weekend band from production. Before the first band BigFoot were on I made sure to pack water, snacks in to my camera bag ready for the day. From the moment BigFoot opened the festival at 12.30 with an energy that would last for the entire festival.

From photographing the first band I made friends with a number the photographers Henry Pickelhaupt from Germany who for the entire weekend I kept calling Henry Harry as I honestly thought his name was Harry. Henry was a great laugh and we also hung out with a few other photographer Ray Bannister, Pete Webb from St Ives and Tim and Holly Black from Essential Rock Reviews. www.essentialrockreviess.com . There was also Liz Aiken Blogger and photographer from www.bluesdoodles.com amongst another approximate 12 to 15 other photographers who I recognised and had chats with.

Headlining act for the Saturday was Thunder who I have photographed before and had seen on tour year ago in the 80's. So photographing them is always great and brings back brilliant memories of going to gigs.

In between photographing the bands I hung out with the other photographers either in VIP section or near to the stage to listen to the bands and photograph some of the atmosphere. On the Saturday I managed to catch up with "Dirty Thrills" and do a quick photo shoot with them in VIP area and then on the Sunday I had a chat with "last Great Dreamers who were amazing and did a photo shoot with them which was great fun" also had a quick chat to James Toseland from Toseland and had a chat to Marco Mendoza from The Dead Daisies also getting a quick photo thanks to Ray Bannister. Even though there was rain on the Sunday the festival was so buzzing no one cared.
The headliner on Sunday was The Darkness who hold a special place in my heart as in 2003 when they were on every cover of every music magazine I had contacted them asking if I could photograph them and they said yes. The Darkness was the first music artist I photographed and I am grateful for them giving me a chance as from the first time I press the button on my camera at their gig in 2003 I was hooked and knew that this was what I wanted to do for the rest of my life.

So I tend to get a little excited about photographing The Darkness and have to try and not think about it and also not to sing along whilst I am photographing I find very difficult as I just want to sing and dance. I have photographed them 3 times in total now including Steelhouse and every time the band have been incredible giving a fantastic performance which fans and even people who have never ever been to a Darkness gig would find mind blowing. Justin toned the set down a bit as there was a younger audience there and he was so good at performing you really have to go to a gig to see what the band are like as they really know how to put on a great show.

Justin was very witty inbetween their set and if you look at utube he did a song singing to a blow up doll which was so funny.
I stayed for the set as well there was no way after the first 3 songs no flash (which is what is the norm for if you are photographing an artist) that I was going to head home. So I stood in the audience singing and soaking in the atmosphere. Looking at the man dressed as a banana and all the other fans really enjoying the gig.


It was lovely to see so many children at the festival and young muscians (guitarists and drumers) who are the future of music being put on their parents shoulders for the festival and having fun.

I met a few of the parents of BigFoot and they were all so very proud.
I have so many amazing memories from this festival and can't wait to photographing the next one.